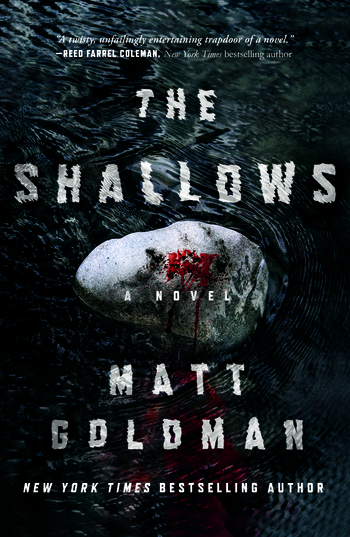 Matt Goldman’s third book in the Nils Shapiro series, The Shallows will be released in June and like the others it is set in Minnesota, this time he and partner Ellegaard of Stone Arch Investigations have been hired to investigate the murder of attorney Todd Rabinowitz, whose body is found in Christmas Lake secured to a pier with a fish stringer through his mouth. The widow, Robin, admits she’s having an affair with sculptor Arndt Kjellgren, but assures Nils that that she and her husband were going to be soon filing for an amicable divorce. She is certain that the murder is somehow tied to her husband’s law firm, who supports far-right political candidate, Karen Tressler.

While Nils and Ellegaard are in the offices of Rabinowitz’s firm, there is a bomb threat and Arndt Kjellgren is arrested as a suspect. Mysteriously, he breaks out of jail and is found later that day with Robin in an apparent murder suicide.

As the bodies begin to stack up, there is no shortage of suspects. Shapiro and his partners reveal a web of intrigue surrounding the law firm and the suspects. Suddenly, everyone wants to hire Nils – the Minnetonka Police Department, the FBI, and the law firm itself.

Favorite characters from the last book reappear, including Jameson, the former football player turned nurse practitioner from Broken Ice. Nils is still in love with his ex-wife, Micaela, and there is a surprising turn in his personal life in this installment.

As an Emmy-award winning writer for Seinfeld and the Ellen Show, Goldman has an ear for dialogue. His comedic roots are showcased in Nils Shapiro and in this installment, we get to know Nils on a deeper, more personal level. Goldman shines more light on the relationship between Nils and Micaela, which ups the ante for the next installment.

Listen to my interview with Matt on WTIP’s Superior Reads website or on my blog at superiorreads.blog. Watch the Grand Marais Art Colony’s website for registration to open in June for the November 7-10 North Shore Readers and Writers Festival where Matt will be presenting.

One thought on “The Shallows by Matt Goldman”