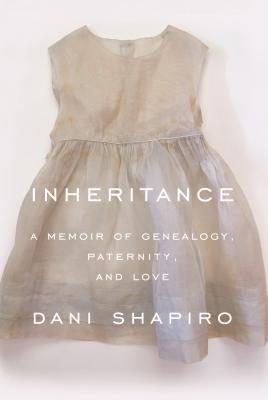 In 2016, Dani Shapiro, like so many others, submitted her DNA to Ancestry.com on a whim. What she found out would change her life forever – her father was not her father. Inheritance: A Memoir of Genealogy, Paternity, and Love is the story of Dani Shapiro’s search for her biological father.

Whenever Dani told people that she’d grown up in an Orthodox Jewish family, she got a strange look – the blond haired, blue eyed Dani didn’t look Jewish. She spoke fluid Hebrew. She’d gone to Hebrew school. She remembers playing with the fringe of her father’s tallis during services. Her father was the oldest son born into a family “obsessed with recording itself – a family conscious of its own legacy.” Her ancestors were the foundation upon which she built her life – the ballast during the stormier times in her life – the compass when she didn’t know what to do next.

It was surreal. She called her half-sister, Susie, a New York City psychoanalyst, to see if she had done any genetic testing. Susie was her father’s daughter from an earlier marriage. They weren’t close, but they were both part of a large Orthodox Jewish clan. Their grandfather had been a founder of Lincoln Square Synagogue. Their uncle had been president of the Orthodox Union. Their grandparents had been pillars of an observant Jewish community both in America and in Israel. Dani and Susie had a shared history . . . and then suddenly, they didn’t.

Dani was 54 years old. Her father had died when she was 23 in a car accident that had also left her mother badly injured. Now it seemed, Dani was losing her father again. She’d been very close to her father and had a contentious relationship with her mother. She remembered a conversation she’d had with her mother on the second anniversary of her father’s death. A conversation about a fertility clinic in Philadelphia. Her parents had had difficulty conceiving. Her mother told her: “I would go to Philadelphia, and they would monitor where I was in my cycle and when it was time, they would call your father down for the procedure.” Artificial insemination. What Dani found out later was that because of the shame of infertility, doctors often mixed the father’s semen with donor semen, and sometimes the father was told simply that his semen would be mixed with a treatment. In 1962, ancestry.com did not exist. It wasn’t until the 1980’s that it was even possible to test for DNA.

The results of Dani’s test set her on a quest. Would she be able to find an anonymous sperm donor all these years later? If she did, would he want to meet her? Did she have siblings? There were a million questions running through her mind. With the help of her husband, a journalist and screenwriter, she eventually learned the identity of her biological father.

Inheritance is a memoir about identity, about what makes a family and what it takes to be a father. In the last chapter of the book, Dani Shapiro stands at the podium during a reading, gazing out at the family she has only recently met, and searches the room for the father who “loved her into being” the father she lost and found again, the father she knows is not there physically, but is ever-present.

I recommend Inheritance for fans of Glitter and Glue and The Best We Could Do. Listen to my author interviews and read all my reviews on http://www.superiorreads.blog and on WTIP 90.7 Grand Marais www.wtip.org.