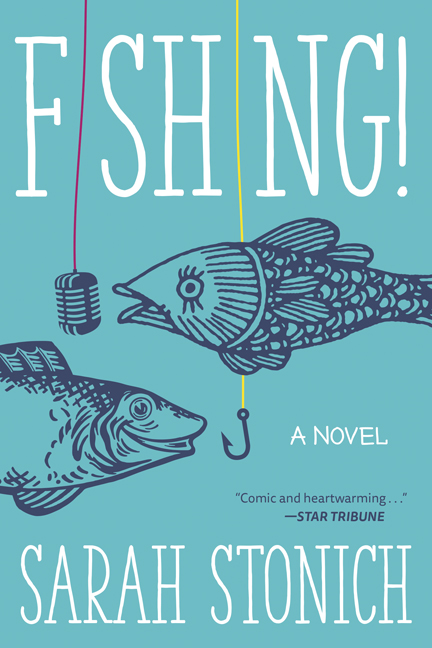 In 2015, Sarah Stonich published Fishing with RayAnne under the pseudonym Ava Finch. Lucky for us it’s being made into a trilogy with the first installment being reissued this month by University of Minnesota Press as Fishing! by Sarah Stonich.

Hot off the pro-fishing circuit, thirty-something RayAnne is serving as a consultant for the first all-women talk show about fishing on public television, hailed as Oprah in a boat. When the series needs a new host, RayAnne is hired on a temporary basis. RayAnne and her colorful production assistant, Cassi, prefer to schedule real women with inspiring stories on the show, while the sponsors prefer celebrity guests. They’ve hosted conjoined twins, the owner of a custom bra shop called Valkyries, and a former marine mammal trainer putting her skills to work as a relationship coach. “Which is easier to train, a difficult partner, or a dolphin?” RayAnne asks. “A dolphin, of course.”

RayAnne’s new job is a source of anxiety – will they find a permanent host? – but the sudden appearance of her father Big Rick, the fallen star of the one-season Big Rick’s Bass Bonanza, currently on hiatus from his sixth marriage and on a bender, is a greater source of angst. RayAnne’s coping strategies have been well-tested, after her parent’s divorce, she and her brother Ky were largely raised by their wise and big-hearted Gran, Dot, while her mother reeled off-camera and began a career as a new-age coach for menopausal women.

Sarah Stonich is at the height of her powers, having fine-tuned her comedic voice with Vacationland and Laurentian Divide. Fishing! is laugh-out-loud funny, but don’t be mistaken – Stonich will take you into the deep. Her understanding of the complexity of family, dysfunctional relationships, and difficult people make Fishing! more than a feel-good read. The best part – we can expect book #2 in the series in the near future.

I recommend Fishing! for fans of Lorna Landvik, Fannie Flagg, and Ann Tyler. Listen to my interview with Sarah on Superior Reads on WTIP 90.7 Grand Marais on March 26 at 7:00 pm and on the web at https://www.wtip.org/superior-reads-lin-salisbury and www.superiorreads.blog.