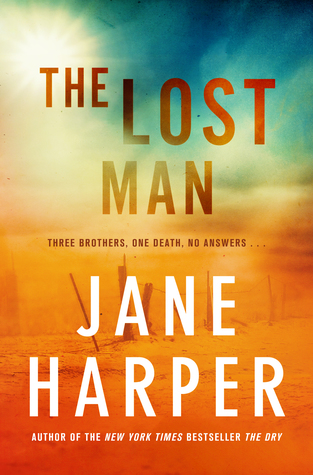 In the opening scene of Jane Harper’s, The Lost Man, two brothers stand at the grave sight of an old stockman where they have found the body of their brother, Cameron. Brothers Nathan, Cameron, and Bub Bright grew up on this remote land in the Australian outback; so flat “it seemed possible to detect the curvature of the earth.” The Bright brothers know that the terrain is rough and the sun unforgiving and that any man who dares to leave his vehicle without food and water might as well dig his own grave. What drove Cameron to leave his car nine kilometers away and walk to the stockman’s grave without the provisions he’d packed into his car that morning?

Harper describes the grave of the stockman, the stone worn so that only a one and eight and a barely legible nine could be read – 1890 something – but three words were still visible: who went stray.

“Months, up to a year, even, could slip away without a single visitor passing by, let alone stopping to read the faded inscription or squint west into the afternoon sun. Even the cattle didn’t linger. The ground was typically sandy and sparse for eleven months of the year and hidden under murky floodwater for the rest.”

Cameron was the golden boy of the Bright family, the middle son who took over the homestead after his father’s death. His mother, Liz lives with Cameron and his wife, Ilse, and their two young daughters. Nathan, the oldest, is the black sheep of the family. The three brothers own land adjacent to each other, Cameron’s being the largest swath.

Like a pack of dingoes, secrets circle Cameron’s death – an abusive childhood, a long-ago tryst that may or may not have been consensual, and Cameron’s own strange behavior in the weeks leading up to his death. The police think Cameron took his own life and find no justification for further investigation. His mother Liz is devastated. His wife Ilse is overwhelmed. Even Cameron’s daughters, Sophie and Lo seem to be hiding something. Fingers point in all directions. Nathan has his own troubles. After an ugly divorce, the town has turned against him, and he’s struggling to stay connected to his son, Xander.

Jane Harper’s secret power is character development – Nathan, Cameron, Bub, Liz and Ilse are complicated people with enigmatic pasts. The Australian outback, in all its harsh beauty, is the perfect backdrop for this family drama; I was transported there, both physically and emotionally, bereft and desolate and nearly uninhabitable. Though it’s slow to unfold, the novel comes to a surprising yet satisfying conclusion.

This is Lin Salisbury with Superior Reviews. Listen to my author interviews on the fourth Thursday of each month at 7:00 pm on WTIP, Superior Reads, 90.7 Grand Marais or on the web at www.wtip.org.