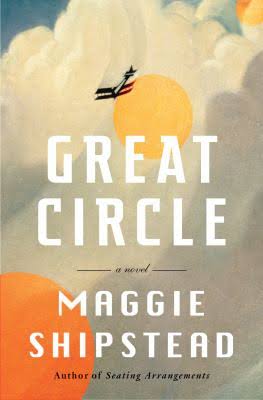 GREAT CIRCLE by Maggie Shipstead opens with the rescue of twins from a sinking ocean liner in 1909; Marian and Jamie Graves are rescued by their father, but their mother perishes. Soon after, they are sent to live with their indifferent uncle Warren, a man who had at one time been a promising artist but shows a greater commitment to gambling and drink than to his work or his obligations. The twins are left to themselves most of the time – their uncle releasing them “into the wilderness like a pair of dogs trusted to return eventually.”  Jamie, like his uncle, is a gifted artist. When Marian encounters the Flying Brayfogles, two barnstormers from a defunct Flying Circus, she becomes fixated on learning to fly.

“She was at an age when the future adult rattles the child’s bones like the bars of a cage.”

Marian is driven to find a way to pay for flying lessons. At fourteen, she runs moonshine for a local bootlegger, driving a truck advertising Stanley’s Bread and Cake. She cuts her hair short and is often mistaken for a boy, much to Jamie’s chagrin. One of her deliveries is to the local brothel, where the ladies dress her up and put makeup on her. It’s there that she meets Barclay McQueen, a rancher in theory, but a racketeer at heart. Barclay McQueen becomes obsessed with Marian and offers to pay for her flying lessons and a loaned airplane; Marian accepts but knows that there will be a price to pay for his generosity. Marian wants nothing more than to be the first woman to fly the Great Circle from pole to pole, and she will do almost anything to achieve her goal.

The stories of Marian and Jamie are juxtaposed against the story of a current day actress, Hadley Jones, whose career is on the shoals after her latest scandalous affair. She has the opportunity to redeem herself with the role of a lifetime – playing Marian Graves, the first woman to attempt the Great Circle, who supposedly crashed into the sea, never to be found.

GREAT CIRCLE is a sweep of a novel – soaring with the ambitious tenacity of young Marian Graves, yet tender as her artistic brother, Jamie, who though he cannot harm animal nor man, is recruited to document World War II through drawings that capture time and space in a way that few other artists are capable of.

I was captivated by the stories of Marian and Jamie, and initially, a little less with Hadley’s story, until the unfolding drama of the movie production reveals greater truths about the lives of the twins.

GREAT CIRCLE is a big book – not just because it is nearly 600 pages long – but because of the breadth of the subject matter – art, aviation, prohibition, noncomformity, war, isolation, connection – and the period it spans 1909-2014 – give or take a few decade gaps. There will be So. Much. To. Discuss. with your book group! Maggie Shipstead has a keen understanding of longing and what it means to be human.

I recommend GREAT CIRCLE for fans of Beryl Markham’s WEST WITH THE NIGHT, Isak Dinason’s  OUT OF AFRICA, and Paula McLain’s CIRCLING THE SUN.

GREAT CIRCLE by Maggie Shipstead will be available May 4, but pre-order it today so that it will arrive in your mailbox that day – it’s that good.

Listen to my interview with Maggie Shipstead on Superior Reads on June 24 at 7:00 pm. This is Lin Salibury with Superior Reviews.